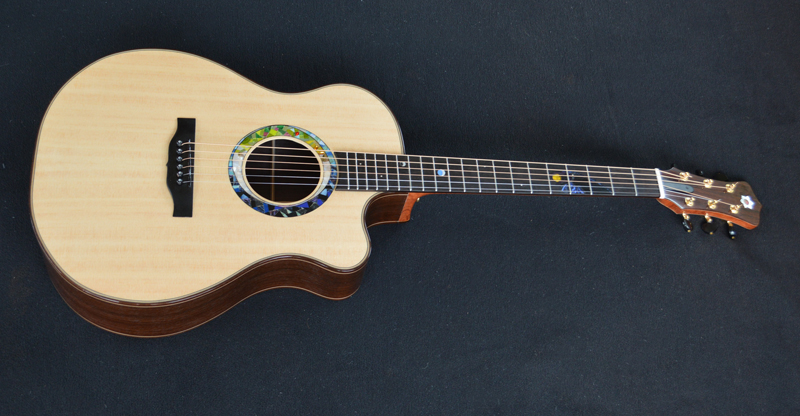 Back and sides – Indian rosewood 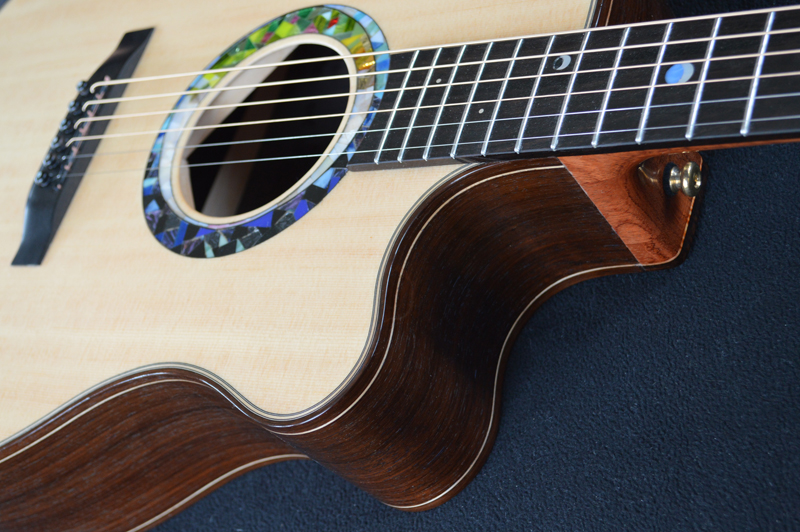 Leif is a talented finger style guitarist who plays with the guitar on his left knee in the classical way.   We designed this guitar together, blending elements of steel string and classical tradition.  The shape is classically inspired, although at 15.5″ across the lower bout it is larger than a classical guitar.  The fingerboard is wider than a typical steel string, and it has a round end like a classical.  The rosette is full, and colorful, and the binding is dark, Indian rosewood with maple accent lines. 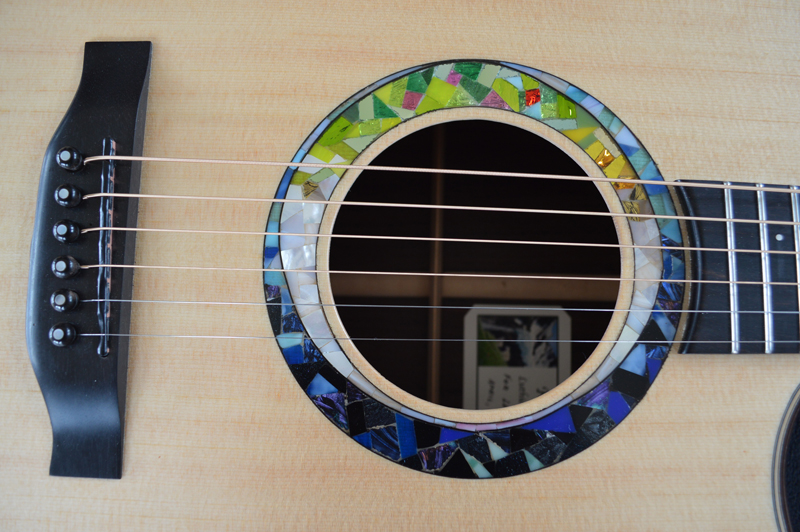 The soundhole rosette is a good example of the collaboration between Leif and me.  Leif lives in Fairbanks, and he wanted the rosette to portray a year in the far north – light in the summer and dark in the winter.  He drew an offset circle within a circle, dark on the outside, light on the inside.  I liked the concept, but suggested that it be in color.  In this photo, summer is at the top, winter is at the bottom.  Night is on the outside, day is on the inside.  In winter the night is long, portrayed by different colors of dark glass and punctuated by bits of green Aurora.  The winter day is short, colored by pink alpenglow.  As winter gives way to spring the days become longer and the ground is snow covered.  Around May patches of green start to appear, and then the snow is gone, replaced by the colors of summer plants, flowers and berries.  September brings a brief flash of autumn colors, and then the long winter sets in.  The rosette has nearly 200 pieces of stained glass and shell.  The photos below show the work in progress. 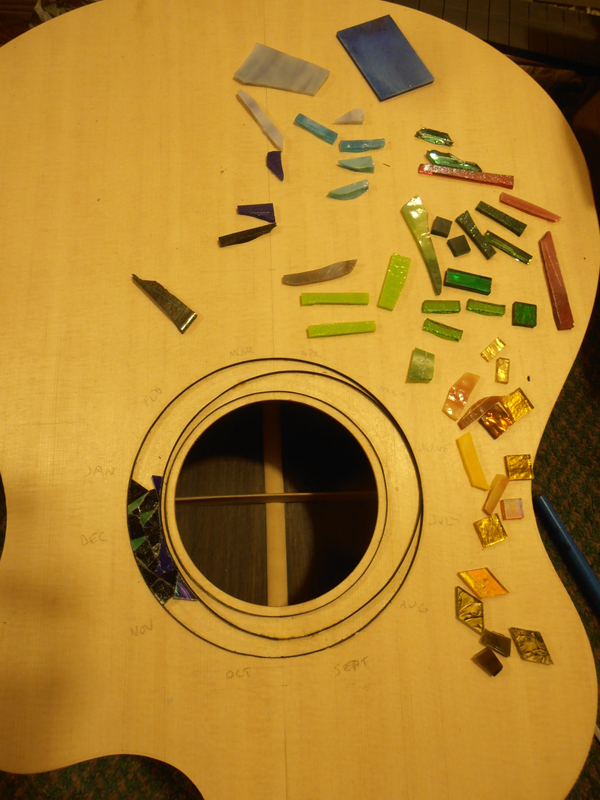 First, circles of black purfling were lightly glued in place to define the day and night areas.  Pieces of glass and shell were cut and shaped to fill the spaces and to be tight to their neighboring pieces.  I worked my way across the rosette, gluing in sections of pieces as I went. 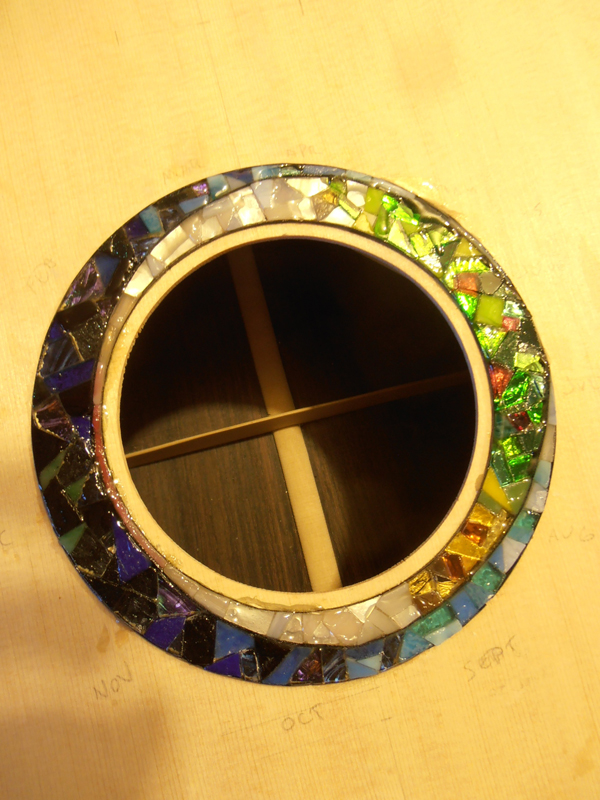 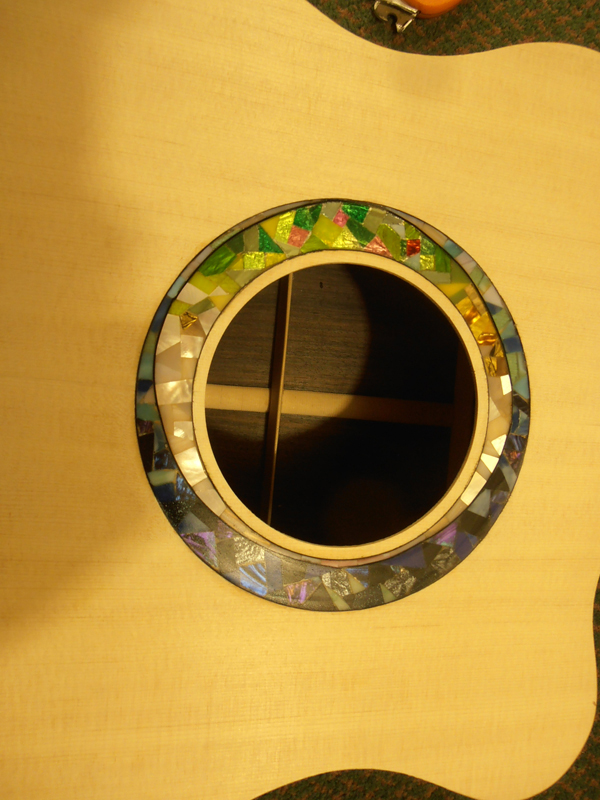 After quite a few days, the pieces were all glued in.  Flattening the glass is tricky.  It is very hard, but the surrounding spruce is very soft.  Care has to be taken to only touch the glass and avoid gouging the spruce.  I use diamond grinding cylinders for this, using them by hand as I would a file.  When the rosette was almost down to the level of the spruce I switched to sandpaper, starting with 150 grit and going up to 3200. 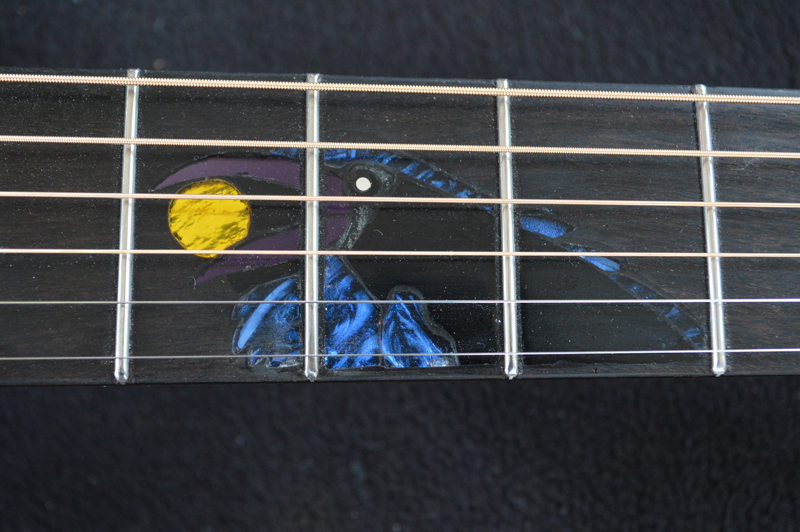 Leif wanted an inlay depicting the Native legend of Raven bringing light to the world.  I used stained glass for most of this inlay.  The body of the raven is black glass, which doesn’t show up all that well against the black ebony, so I used other colors for highlights.  The blue feather highlights are a textured, mirrored glass, as is the sun.  The beak and the area around the eye are also mirrored glass.  The eye highlight is silver. 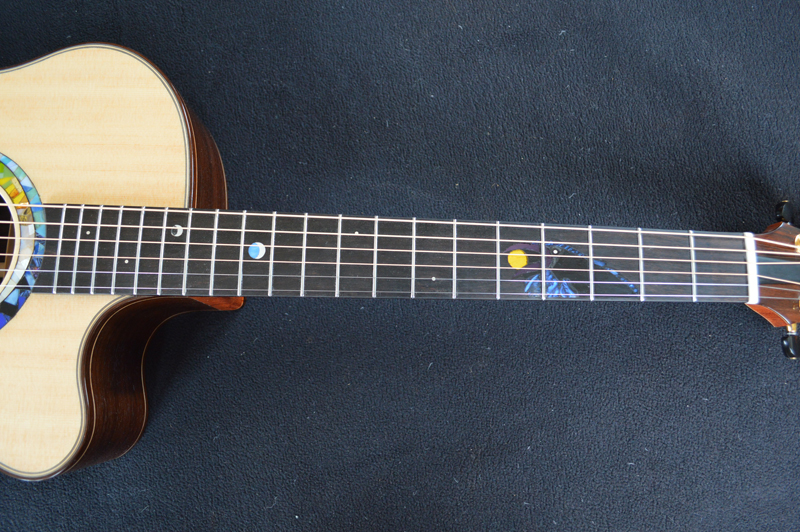 Leif wanted position markers on the fingerboard, too, so we had to incorporate them into the design.    The Earth, illuminated by the Sun in the Raven’s beak, is on the 12th fret.  The Moon is on 15.  Silver stars are on frets 7, 9, 17 and 19.

Here’s another classically inspired detail on the back of the headstock.  Ervin Somogyi does something similar on his guitars, and I have long admired it as being very elegant.  The rosewood veneer on the back of the headstock looks nice, but it is also there to strengthen the neck to headstock joint.  The tuning machines are the Gotoh 510’s I usually use, but Leif wanted the buttons to be black buffalo horn. 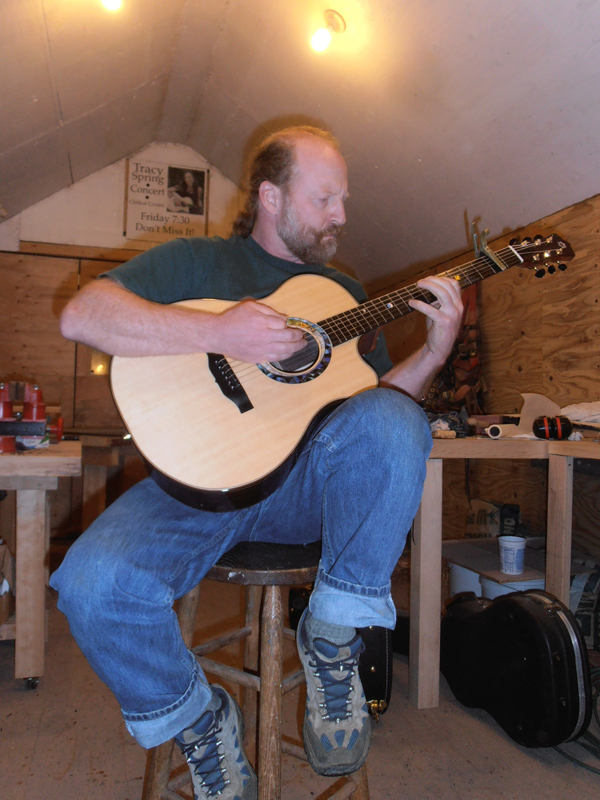 Leif picked up his guitar on the way to the Folkfest in Juneau in the spring.  Here he is in the shop trying it out.  He played a wonderful set with the new guitar at Folkfest.  We met again at the Acoustic Alaska Guitar Camp in Wasilla in September.  Guitar wizard Pepino D’Agostino was one of the instructors at the camp.  He took a liking to Leif’s guitar and gave us a private concert one night.  That was one of the highlights of the camp for me.  And yes, Pepino did give Leif his guitar back.