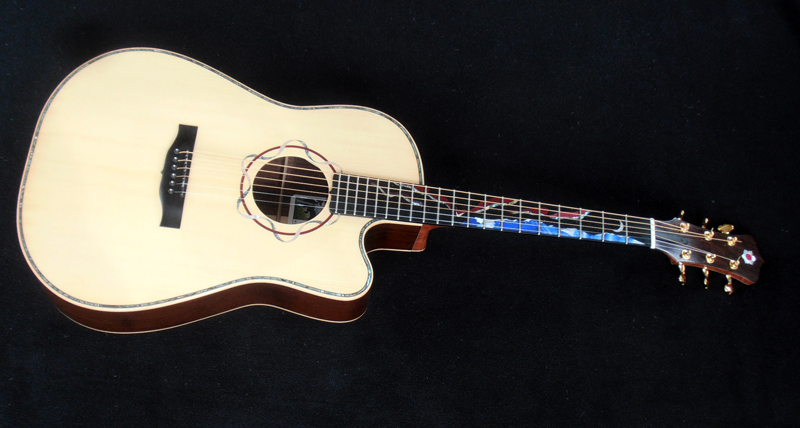 Made for Singer/Songwriter Robin Hopper   in 2014.

Back and sides – Indian rosewood. 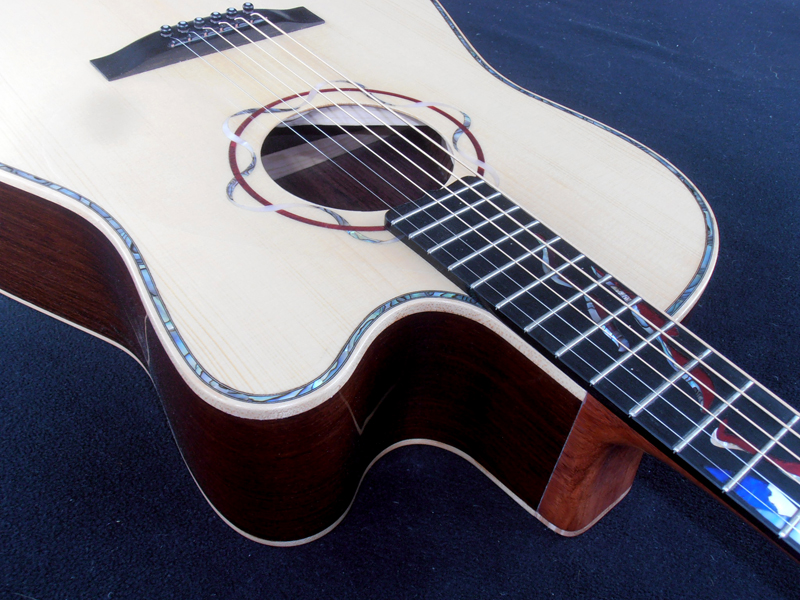 Robin Hopper is a wonderful         singer/songwriter who has produced many CDs of original music.  She is also a   Grammy Award nominated music teacher.  We met at the Alaska Folk Festival in Juneau.  She had been playing a 12 fret to the body Martin  dreadnaught.  She liked the guitar, but when she put a capo on the third fret she only had 9 frets to work with.  She wanted a guitar similar to her Martin, but with a cutaway.  She emphasized that the guitar had to have good bass response.  Her playing style stresses an alternating thumb on the bass strings, as if a bass player were playing along.  I chose a nice spruce top with a lower tap tone, and braced it to bring out the bass notes.  The result was very pleasing, a strong bass response, yet balanced all the way up to the high harmonics.  Another guitarist at the Folkfest described this guitar as “a cannon”.  It creates a lot of sound with just a light touch on the strings.

Robin was very specific about the inlay she wanted.  She lives at the foot of the Chugach Mountains near Anchorage.  She asked me to depict the mountain range on a winter night with a rare red and magenta aurora blazing overhead.  I used stained glass, abalone, and mother of pearl for the inlay.  The stars are made of silver wire.  Here is the inlay, flattened and polished, before the frets were put in. 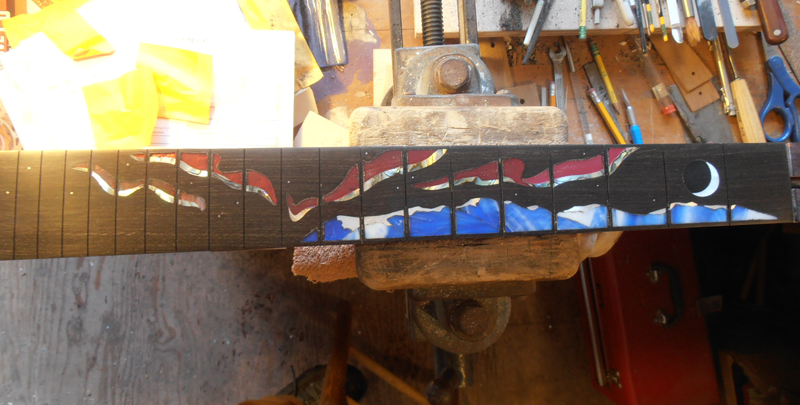 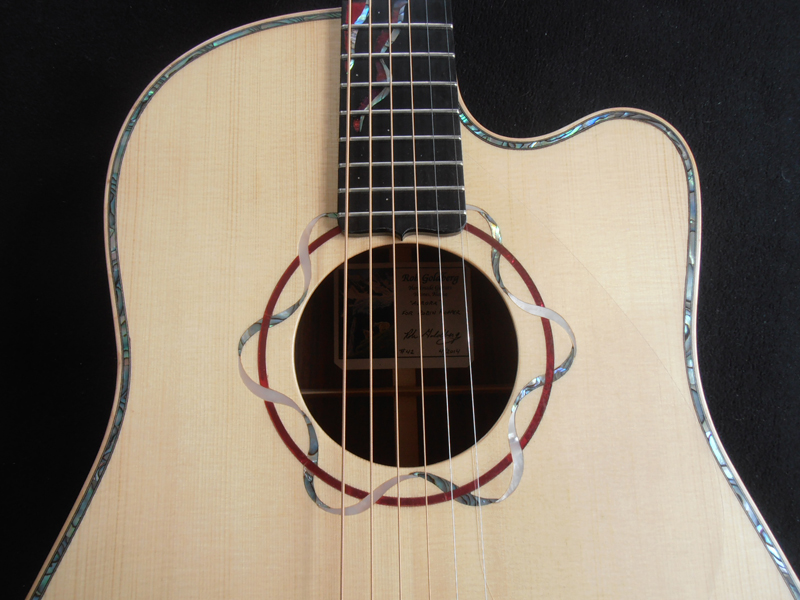 The rosette is a ribbon and ring.  I like the grace and depth of this design.  The idea for this type of rosette came to me when I was thinking about a favorite toy of mine when I was a kid – the Spirograph.  The ring is red glass.  The ribbon is mother of pearl and paua abalone.  The purfling is also paua. 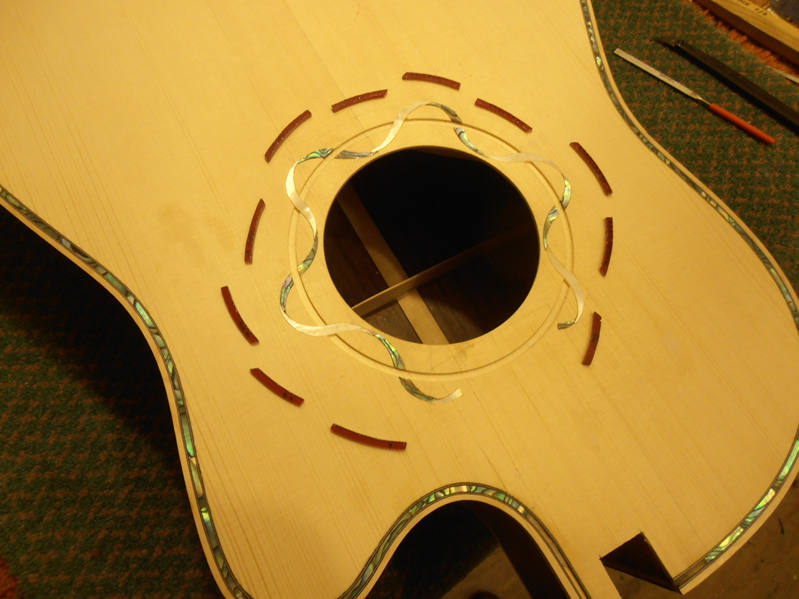 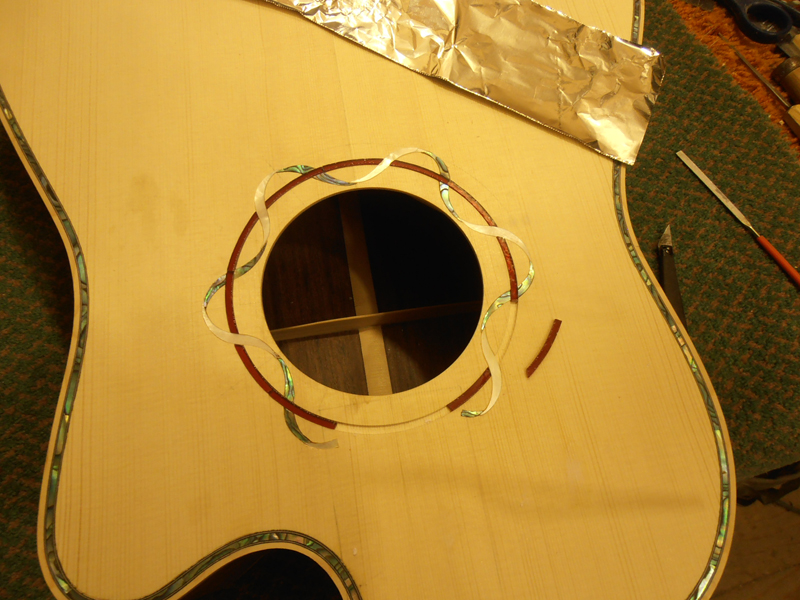 Here is the rosette in progress.  The channel for the ring is cut with a circle cutter on the drill press.  The slots for the ribbon are cut by hand with an x-acto knife and tiny chisels.  It is very careful work.  There is no margin for error when inlaying into spruce.  It is also very easy to cut all the way through, damaging the soundboard.  I back up the glass with aluminum foil to give it more luminosity. 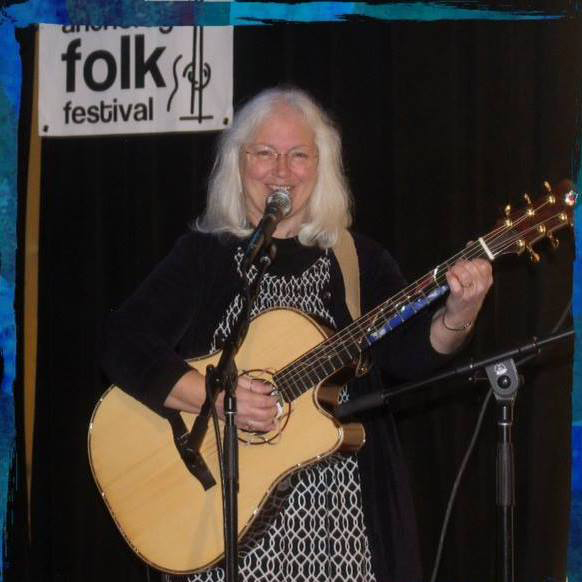 Robin and Aurora at the Anchorage Folk Festival.