In 1973 I made my first guitar, a solid body electric, in my basement when I was in high school.  I bought some of my materials from well-known jazz guitar maker Sam Koontz.  A year later I met luthier Bill Cumpiano in Williamstown, Massachusetts. He had just opened his shop after learning the craft from Michael Gurian (Gurian Guitars) and Michael Millard (Froggy Bottom Guitars) in New Hampshire.  I became his first apprentice. It was a traditional apprenticeship, in that I traded my labor for an education. I did countless repairs and then learned how to construct and voice a guitar in the traditional way.  We bent sides over a hot pipe without molds, a technique which allows for an unlimited variety of shapes and sizes.  I learned how to evaluate tone woods, which are extremely variable, and how to extract the musical potential from each piece. I cut a lot of mother of pearl and abalone, and learned to inlay it seamlessly.

I worked with Bill for two years, working days, nights and weekends.  It was a very rewarding experience.  In 1976 I opened my own shop in the Berkshires and made guitars there until 1980. My business was called Empyrean Guitars. In those years I made 35 guitars, every one unique.  Then I moved to Alaska to become a landscape painter, leaving my tools and precious supply of instrument wood in storage.

Fast forward to 2007.  I have been a professional artist for 26 years.  I’m married and raising two teenage boys.  I’ve built our house and have explored vast areas of Alaskan wilderness.  It’s time to start building guitars again.  I built a shop and set up all my tools, something I should have done years ago.  First I helped a teenage friend build an electric guitar. Then I built another one with my son, Aihan.  Next came a rosewood and spruce 16″ jumbo with a cutaway for a friend.  In the summer of 2010 I finished two more rosewood guitars.  I am now set up and making guitars again.

In a way, I feel like Rip Van Winkle waking up from a thirty-year nap.  The community of luthiers has expanded greatly during this time, and many innovations have been put forward.  I’ve been doing a lot of research.  I’ve been very influenced by the work and writings of Ervin Somogyi.  I have made over twenty acoustical and design changes to my instruments based on Ervin’s ideas.  The result is that my recent guitars are by far my most responsive and musical.  I have continued to experiment with Ervin Somogyi’s theories, with excellent results.  So far in 2012 I have made two guitars and a cello, and all sing beautifully. 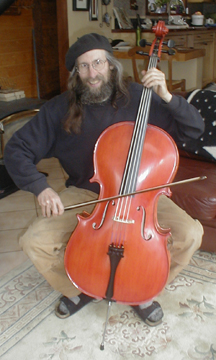